Lead the Fight Against Opioids

/ / Lead the Fight Against Opioids

Lead the Fight Against Opioids 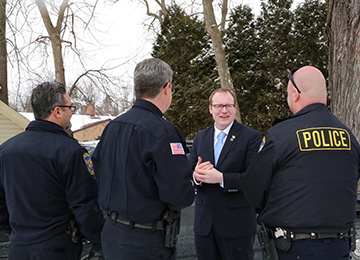 The opioid epidemic has destroyed lives and inflicted untold misery on McHenry County families. Drug overdoses now kill more people each year than car crashes, gun violence, or breast cancer. As a founder of the McHenry County Opioid Awareness Initiative, combatting this deadly epidemic has been near to my heart.

As State’s Attorney, I have led the counteroffensive against the opioid epidemic. Through the programs we have established, drug overdoses have fallen in McHenry County by ____% since 2017 while overdoses continue to rise in surrounding counties.

I have also filed a federal lawsuit against the largest opioid manufacturers which are alleged to have misrepresented the addictive qualities of opioids when marketing their drugs to doctors. This lawsuit seeks damages for the cost McHenry County has expended combatting the opioid epidemic.

I’ve started a number of effective rehabilitation programs, restoring hundreds of addicts to sobriety and personal responsibility. I developed “A Way Out” in McHenry County, allowing anyone struggling with addiction to voluntarily go to a local police station, turn over any drugs in their possession without risk of prosecution, and get the help they need to overcome their addiction. To date, over 150 people have accessed the program and received treatment.

I developed and raised money for the first inpatient recovery program in McHenry County for those with no or minimal insurance coverage, which tends to be most addicts. I worked with the Sheriff to organize narcotics anonymous meetings in jail so inmates with substance abuse issues can begin the process of recovery. And I worked with Centegra Health Systems to get NARCAN, a heroin overdose antidote, into the hands of every police officer in the county for no cost, saving over 100 lives to date.

Finally, I am working to educate the public on opioids. I have worked with every school district in McHenry County to develop lesson plans and other programs to educate children and parents on the dangers of opioid abuse. And I organized a workgroup of doctors, law enforcement, and the recovery community to assist in educating doctors about the dangers of over-prescribing opioids.

Together, we will continue to fight this deadly epidemic.

Be Efficient with Your Tax Dollars